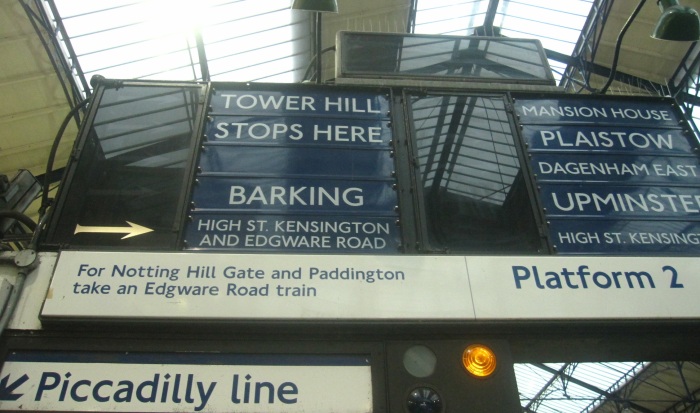 A trip to London – especially for those that have lived and cherished what London has to offer – is always a chance to celebrate and consolidate.

Celebrate due to numerous stimulants that trigger all our senses and present us with the opportunity to just live life to its max.

Consolidate due to the recollecting process of old memories that are associated with every single corner of this marvellous city.

Thus, a wedding in Ireland we had to attend was no a better excuse to spend one night in London.

Things had to be simple. No exhaustive shopping, no London Eye, no Oxford Circus, No East London drinks, no wines in Oxo tower, no Indian of Bayswater. 24 hours had to be spent efficiently around Kensington High Street.

BA 0830 landed at 17.10 at Heathrow and we took Piccadilly line to Earl’s Court. Once in the tube, it was a chance to marvel the multi ethnicity of people around us that normally we forget when away from London. 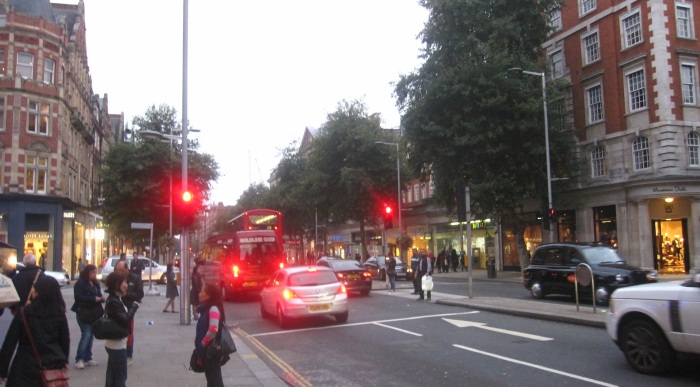 We made it to Earl’s Court and then, moving strategically to the middle of the platform so as to be just by the foot of the stairs at Kensington High Street – sometimes everything has to be precisely planned – we entered the Tube and in just few minutes we arrived at the station that probably is responsible for the most “tubes uses” in my life over a period of almost 7 years! 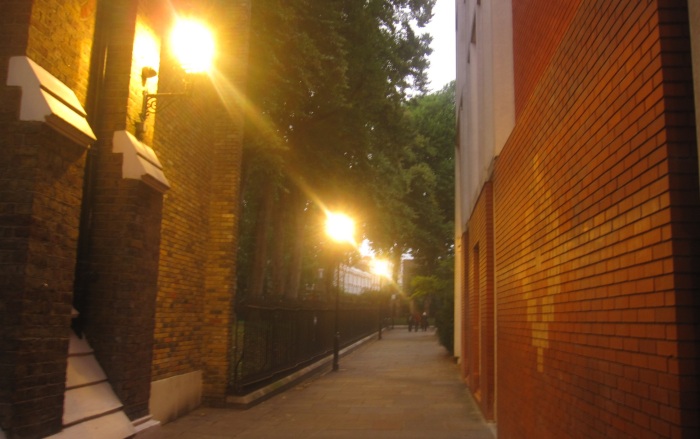 We did not exit straight away. I stayed for a while and recollected all those tube exits all those years – with rain, with sun, early in the morning, late at nights, dry summer days or windy and rainy autumn days, with friends or alone, happy or sad … yin and yang! Sometimes even such a plain thing such as a tube station can trigger so many feelings into one’s heart! We walked up the stairs and made it to No 10 after walking through the magnificent Kensington Church Walk. We greeted our friend, left our stuff in a corner, chatted for while after putting out our thirst with a nice glass of orange juice – but not too much so as not to leave any place for the forthcoming drinks – and walked up towards Churchill Arms. Drinks had been arranged almost a week in advance and it was a great chance to see friends from the old times. We chatted and laughed, drank beer and made jokes, talked of the old times and discussed the latest news on the paper. It was fun and it was great to just even for that short period of time in London manage to see friends and keep the fire alive. It also felt nice to be in familiar places. Then, and as we starving and as long as Churchill Arms had stopped serving its delicious food, we made it to the sophisticated and fancy … super market down Church Street and got ourselves two sandwiches! 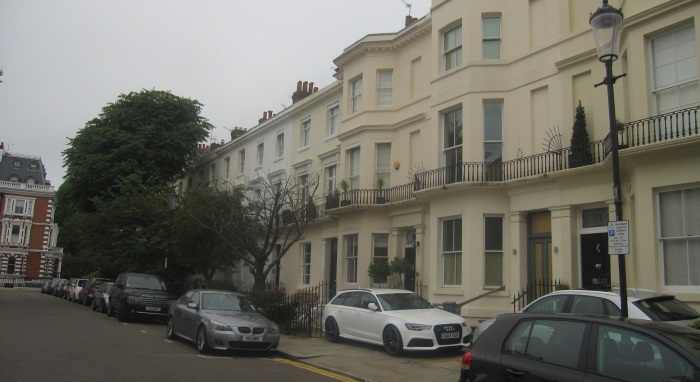 Then we walked all the way down Church Street and visited a nice but noisy and slightly dodgy noisy piano bar courtesy of the dimmed lights. It was not the “piano bar” everybody had in mind. It was a bar and it had a piano but definitely you probably could not call it a piano bar. Whatever! We had a nice time, but after the first beer and some chitchat my powers left me and as I was just so knackered, I was moving left and right like a pendulum. So after a while the Mediterranean gang left! Still, once out of the piano bar, the soft wind just like magic woke me up and took away part of my tiredness so it was a chance to again marvel and appreciate the simple yet modest and nightlife of Kensington High Street. The area cannot boast many bars or pubs but it is definitely interesting to walk and get some nice vibes. Back at home we just went straight to bed! 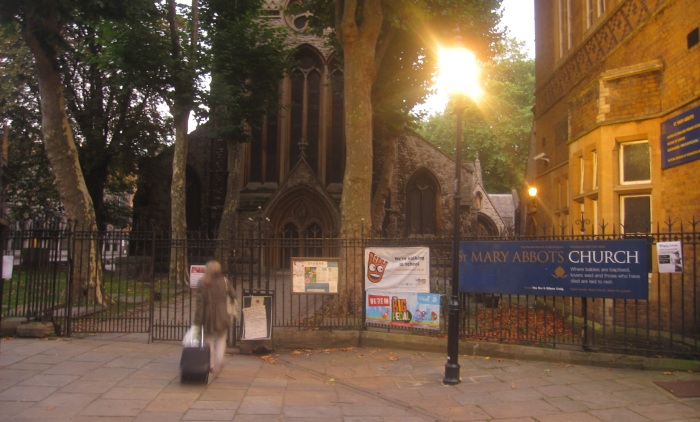 It was 07.00 the other day when the alarm rang. We could have stayed in bed until 11:00 and then head slowly to the airport – very slowly as the flight was around 14:30 – but wouldn’t it be just a shame to miss such a great opportunity and feel the morning London vibes? We dressed up and went outside while making a small plan. It was going to be a busy morning – breakfast, coffee, a quick walk to Hyde Park, shopping and some idle walking in the area. 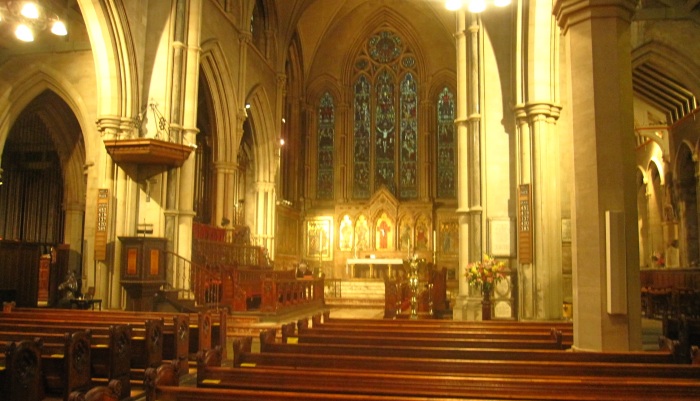 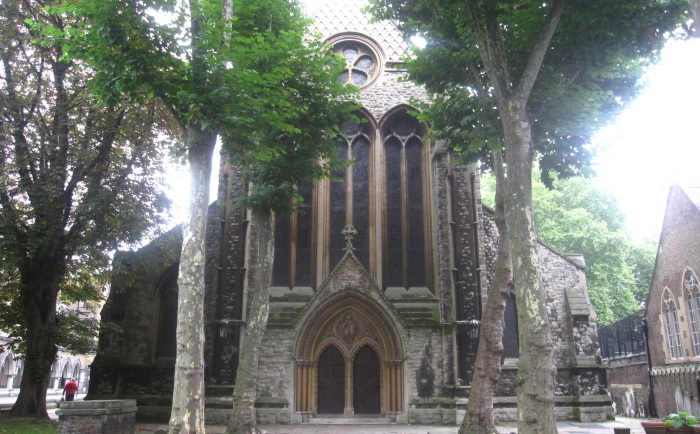 So we did. First it was breakfast. As we wanted to appreciate the humble morning we got milk and some pastry and a small sandwich and found ourselves a good spot to sit – the beautiful small garden just behind St Mary’s Abbot Church. This place is just magnificent and even though it is just a stones throw from the main bustling street, it is so serene and quiet. I sincerely suggest it to people visiting the area. We ate our sandwiches, thought of the old times we used to walk or marvel the area and then it was time for quick visit at St Mary’s Abbot Church. 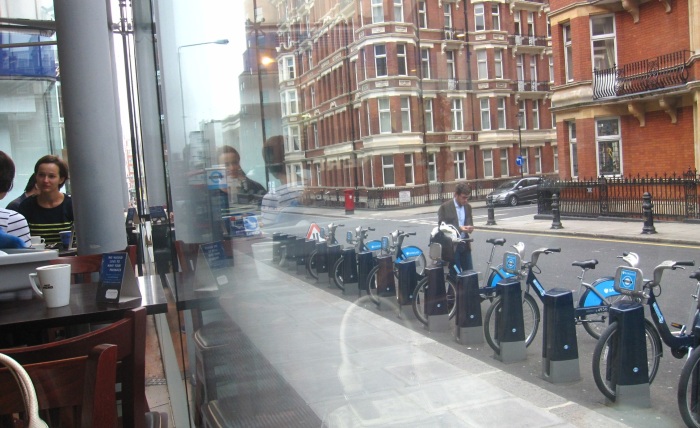 Then it was coffee time! Nero café next to the tube was the usual place, especially when staying a bit further down to the local hotel, so what better option was that than to try it. Through the glass-wall window we were looking at the latest addition in the London streets – bicycles or just marvelling the tourists and the locals going for a run or for tennis or the fancy cars. For moments we talked. For moments we were just silently watching the London daily life passing by and sucking pictures and processing the info that was presented in front of us about the local neighbourhood. 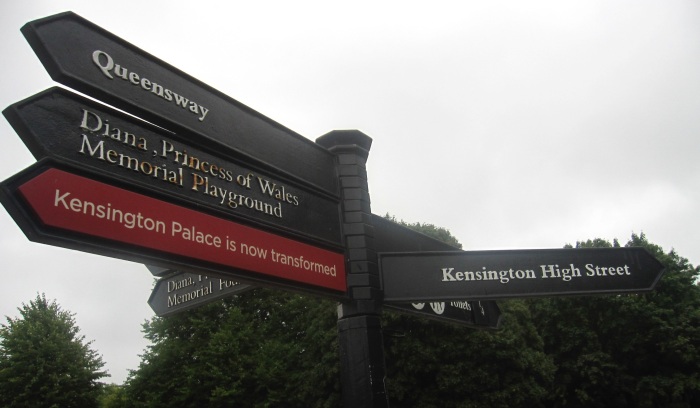 Then we set off for Hyde park and marvelled this superb location for once more in the middle of London. It was 10:00 but the park was full of people running, walking their dogs, pushing their strollers or idly walking, tourists taking photos or young kids playing football. It just makes you wonder how much richer cities are with such parks. 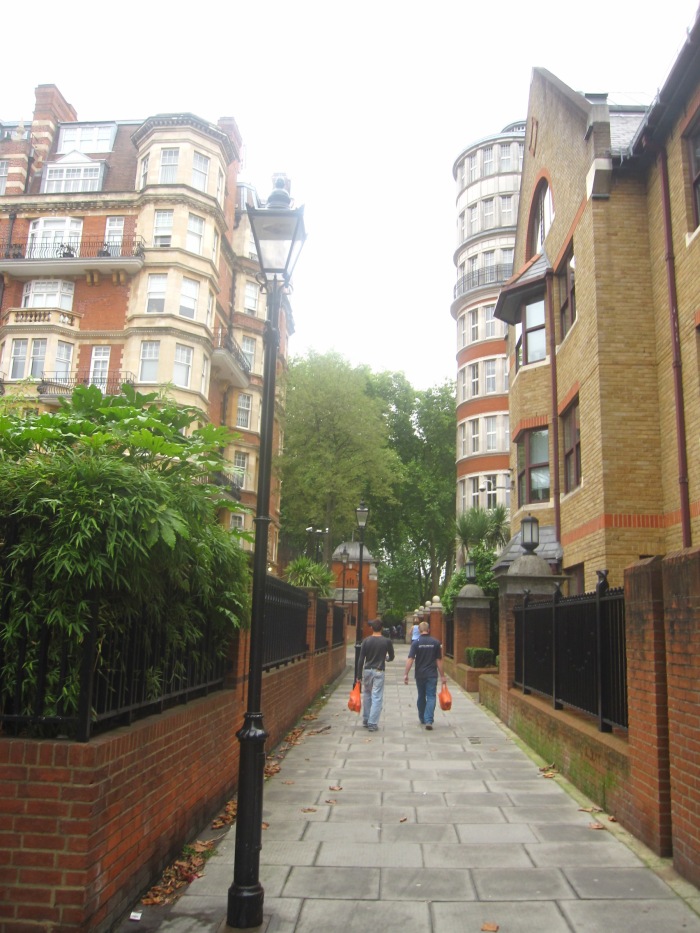 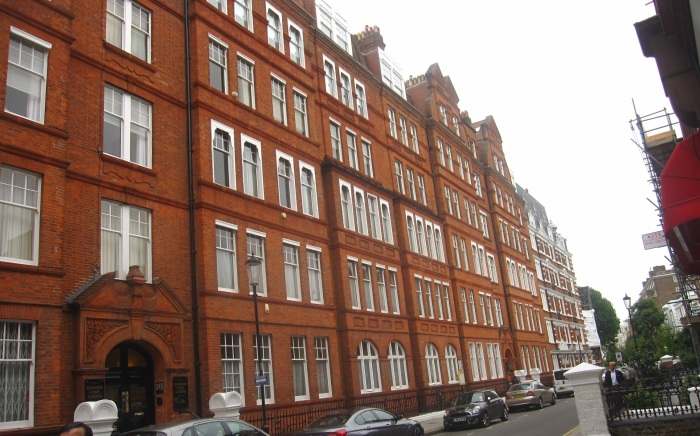 Then it was time to move further south from the High Street and marvel another great area of Kensington with even more fancy cars, nice little cafes and restaurants and beautiful houses. Small kids were playing around joyfully, people were just walking peacefully or sipping their coffee reading the morning Sunday paper and even though this was central London, it seemed like an area in the outskirts of the city. We agreed we would love to live in the area, but after we checked some local agents, we changed our mind. Rents for a one-bedroom flat were barely starting from 500 GBP per week. There seemed to be no upper limit, although we did spot one case that really blew our minds off. 7500 GBP per week! I think that people do really need to be earning half the UK GDP to be able to … splash some cash and afford such houses. Then, and out of serendipity, on our way back to the main street we found another inviting church and we decided to step in. We followed the local mass for 5 minutes, happily looked at the kids that were invited in the front of the church to play a game while the vicar was explaining some life values and left so happy to have discovered another nice corner! 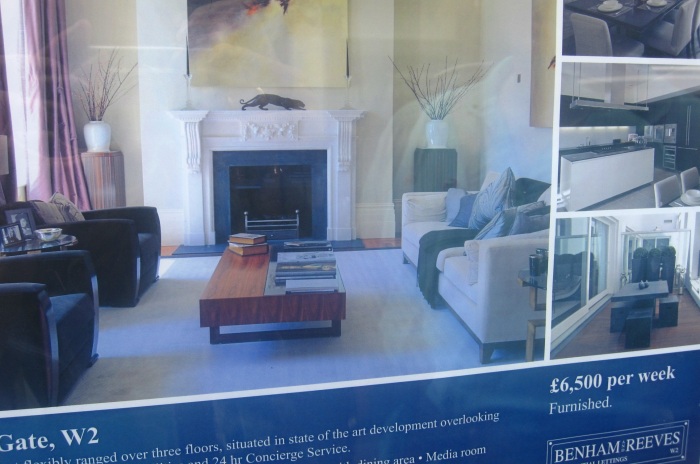 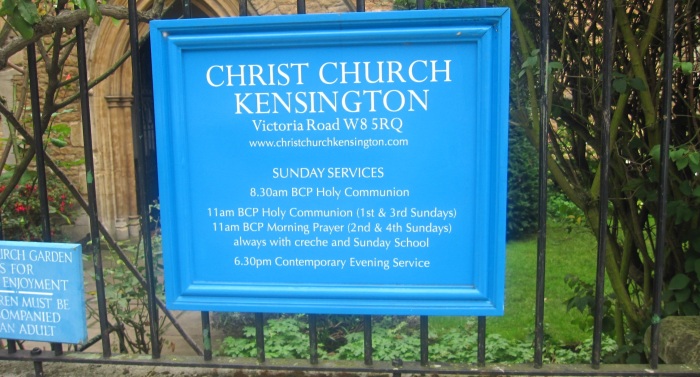 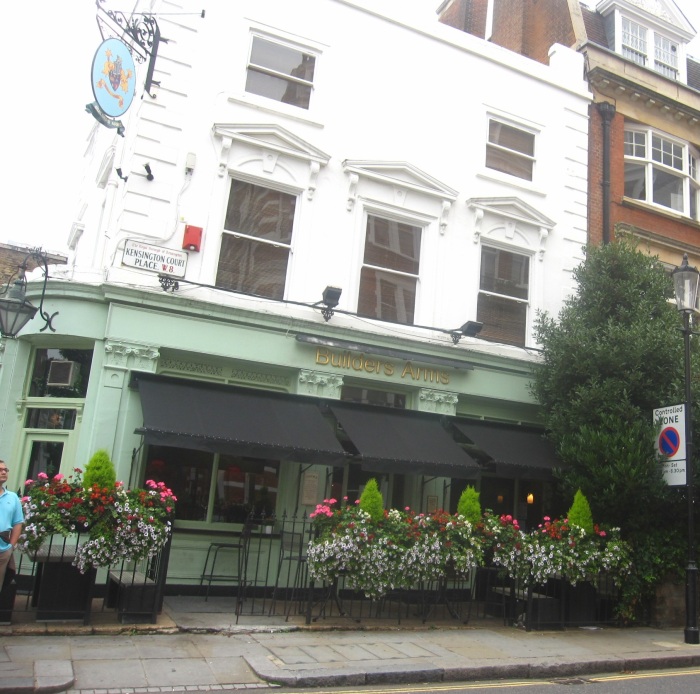 Our stay could not have been completed without… Shopping! We spent an hour buying some beautiful clothes from Trotters – a shop next to the tube – and then, content that we had just finished with a very … “busy” morning, we went back home, packed, said goodbye and walked back to the tube station. Still, as the London God wanted us to cherish and appreciate some last-minute London “offerings”, we were … awarded with a 25-minute delay which made our trip just to the next tube station – Earls Court- a total of 30 minutes. Circle Line was once again running late and the district line prioritisation (Olympia and Edgware line) was still not fixed hence never knowing which platform to move to. I wondered that even 13 years after I had first … landed in the area, some things never change. 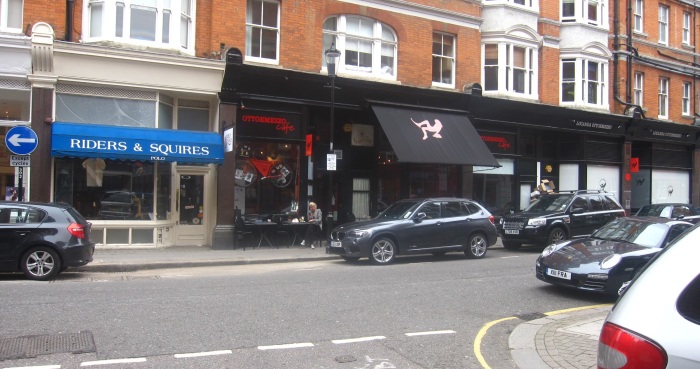 I tried not to take too much notice. Then at Earls Court we entered a sardine-packed tube but made it safely to the airport. 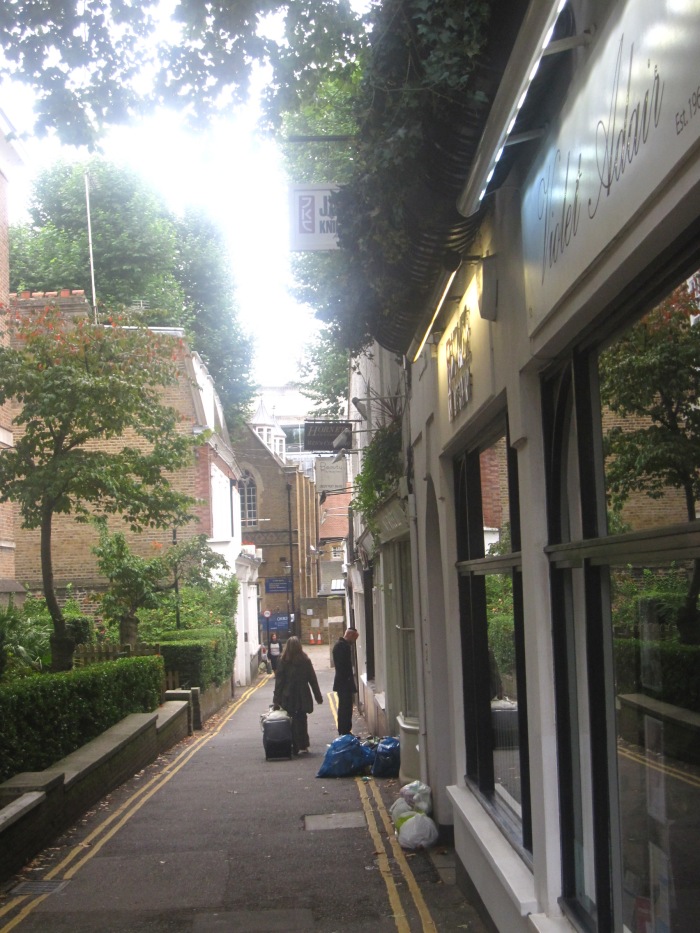 The plane left Heathrow at 16.20. Our 24 hours had just expired and we had none more. When the plane left the ground it was a chance to just look back through the window to the places that 24 hours ago presented us with such a great opportunity the cherish the London offerings and think and consolidate of the old times, see friends and feel so special.

I almost shed a tear but then again I said that leaving is only done to return soon. And actually I smiled as I thought of the tickets that had been booked 4 weeks ago in order to visit London in January for 5 days. 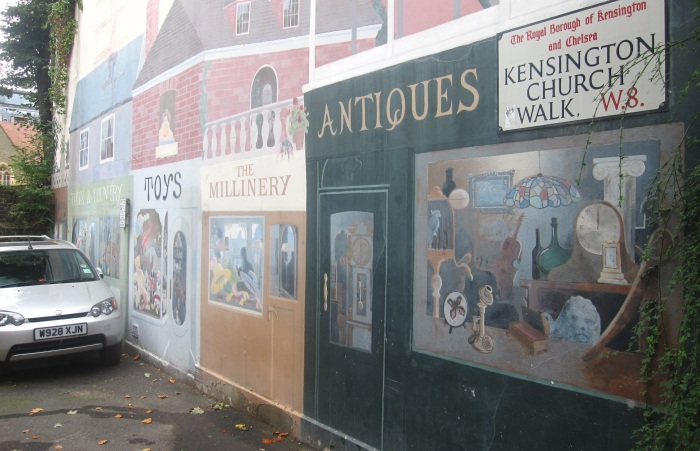 I smiled more, rested on my seat and started already planning how to spend that 5-day stay in London. 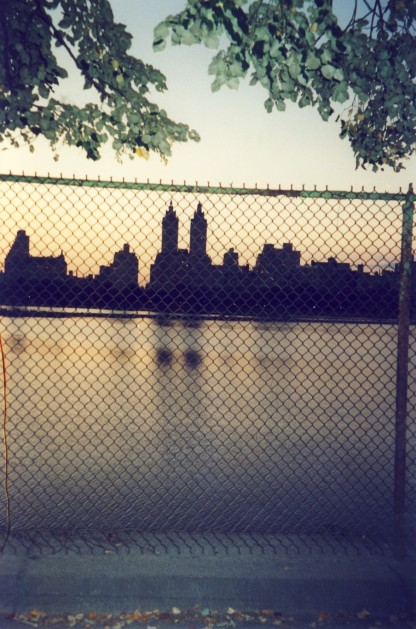 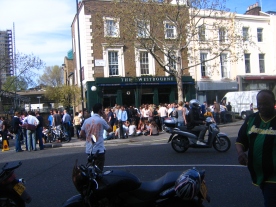 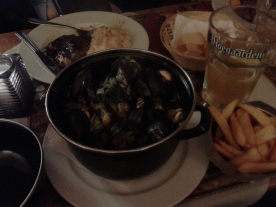 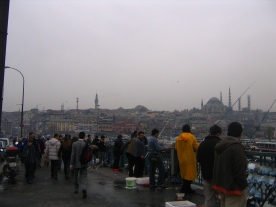 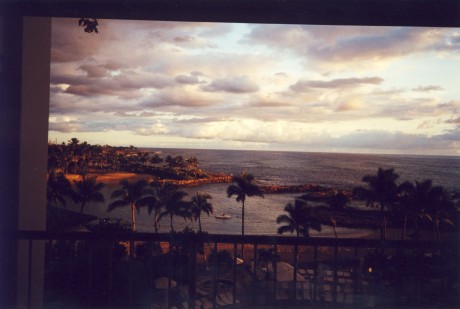 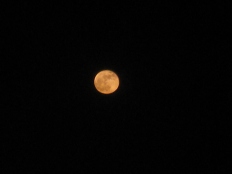 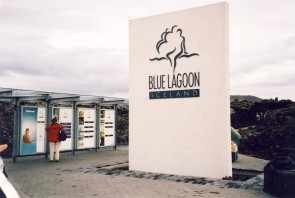 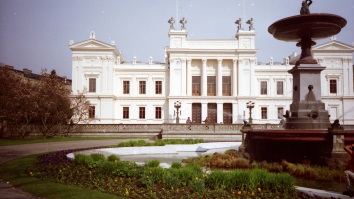 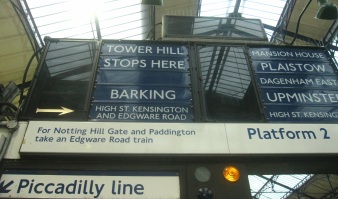 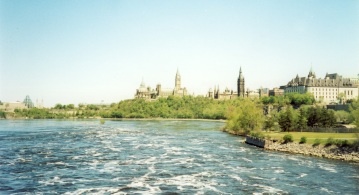 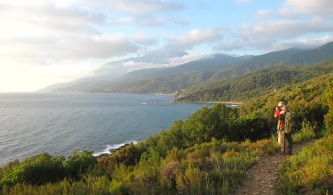 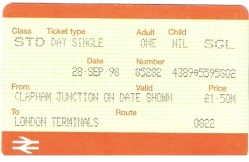